For those of you who would rather not read about my pepper plant, and would rather have a recipe (or would like to hear about Peter and have a food-storage friendly recipe), you might want to check out this recipe for taco soup, which I blogged about on my other blog. We had it yesterday and I was reminded of just how wonderful it is.The meat is the only thing that needs anything other than a shelf--one of the things I freeze, and hope that the power doesn't go out as part of an emergency...

So, back to the pepper plant. You may remember that we picked up a jalapeno plant at the farmer's market near the beginning of the growing season. We kept it inside for awhile. It grew a bud. A pepper started to form. We transplanted it outside. It suffered somewhat and looked scrawny for awhile. The pepper that had started to form didn't fare very well. We left it alone and thought we would have to try again next year. Then..... 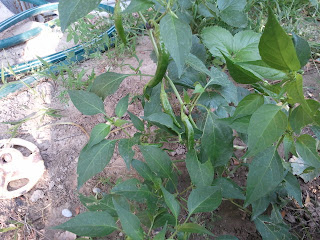 ...we noticed that there were buds. And more buds. And peppers--actually lots of peppers, which hopefully come across in the picture above. Enough of a surprise, yes? For us, yes.
Oh, but Peter wasn't done with the surprises.
Turns out that Peter, who was sold to us as a jalapeno pepper plant, is not a jalapeno pepper plant at all. Turns out that Peter is a serrano pepper plant. And though I know next to nothing about serrano peppers, my understanding from people who would know is that serrano peppers are hotter than jalapeno peppers. So, it's all good. As long as I can tell when the peppers are ripe, which I have read online can be ripe when they are green or red, we'll have some good eating. So, I have to do more research before I begin harvesting. But hey, I have something to harvest. And that is something to celebrate.
Let's face it--there was always going to be another post about Peter. If he didn't grow, I would have written about the importance of growing different things before an emergency so that you would have a better chance of success if/when you have to depend on your garden more for food, and can't just run out to the store for, say, a jar of jalapeno peppers. And that is important. I'm just glad that I'm writing this post instead.... :)
I'm glad that it did work out for us this year--planning on more peppers next year, and I should probably study jalapeno pepper plants so that I know one when I see one... :)
Hope you have had success (unexpected or otherwise) in your garden this year!
﻿
Posted by Marie at 1:21 PM No comments:

Fires in Idaho and elsewhere

Have been watching for news concerning the fire burning near Pine and Featherville, and the most recent information I can find at the moment is the article here. According to the linked article, there are nine fires burning in Idaho right now, and it goes on to give more information on fires in other areas across the West.

Situations like this always make me wonder just how prepared I am. Are my 72-hour kits really ready? Is there anything in my car, or that I would have with me that would help me deal with a situation like that the rafters mentioned in the above article experienced? Would I have enough in my storage to be able to avoid going out into the smoke involved (which is/has been a problem, and is mentioned in this older article) if necessary for health reasons?

How quickly could you evacuate? Might be time for an evacuation drill around here, is what I'm thinking. I am hoping the best for everyone more closely affected, and for whom it isn't a drill at this point...
Posted by Marie at 12:59 PM No comments: